British Airways and Scottish craft brewery, BrewDog, have teamed up to create a transatlantic IPA to celebrate the airline’s centenary, and in a world first brewed beer at 40,000ft.

With the help of British Airways cabin crew, BrewDog founders Martin Dickie and James Watt, started the brewing process on board one of the airline’s Boeing 787 Dreamliners, while cruising 500mph over the north of Scotland. 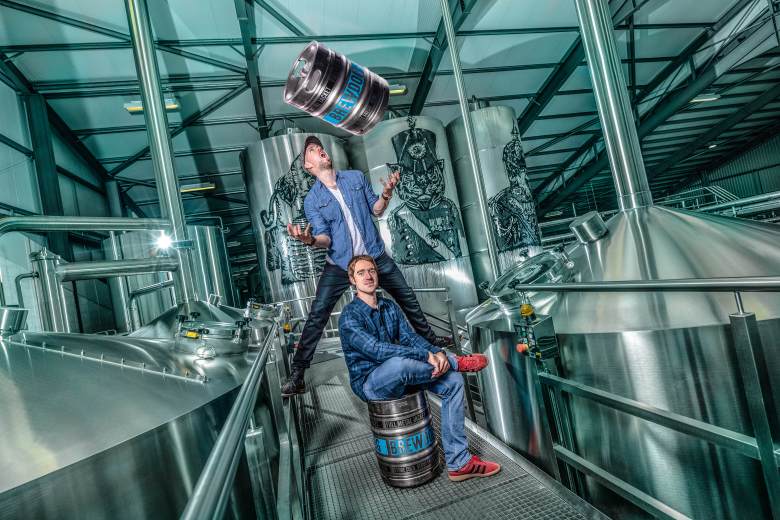 The expert brewers mixed water, hops and barley in the onboard beverage makers to start the mashing part of the brewing process.

Cans of the bespoke IPA, named Speedbird 100 after the airline’s call sign, will be exclusively available to British Airways customers on board all long-haul and short-haul flights and in selected lounges from May 1.

The recipe has been specifically brewed to work perfectly in the air and adapt to the reduction in taste and smell sensitivity at high altitudes.

Hamish McVey, British Airways’ Head of Brand and Marketing, said: “We are hugely excited to have partnered with BrewDog, another British brand that is committed to bringing the best of Britain to the world. Alongside our £6.5 billion investment programme we want to work with industry leaders to ensure travelling with British Airways is an unforgettable experience, so this partnership is a fantastic union.”

James Watt MBE, BrewDog’s co-founder, said: “It’s been incredible to be able to partner with British Airways in their centenary year and create a completely new beer for their customers. ”

Martin Dickie MBE, BrewDog’s co-founder, added: “The key thing is that the bitterness and fruit flavours aren’t really affected by the altitude, so we wanted to play on those two things and ramp up the sweetness. We really hope British Airways customers love Speedbird 100 as much as we do.”

Flyers will be able to watch the ‘making of Speedbird 100’ on the airline’s inflight entertainment system from July.

British Airways will be releasing a series of ‘centenary editions’ in partnership with British brands during its milestone year. The airline partnered with luxury British watchmakers Bremont on the launch of a new limited-edition timepiece, featuring metal from one of the most famous and iconic planes in history – Concorde.

As part of British Airways’ £6.5 billion investment for its customers, the airline also recently revealed its new business class seat and introduced changes to its First, World Traveller Plus and World Traveller cabins, delivering exceptional new restaurant-style catering from Do&Co. British Airways is also rolling out industry-leading Wi-Fi on board, opening new lounges across the world and launching 15 new routes.

A new fun and inclusive bike festival for all ages and abilities will be taking place in Ballater between Friday 23rd and Sunday 25th September.
Noku Phuket opens its doors.
Coworth Park has unveiled details for Woven by Adam Smith, the new restaurant opening at Dorchester Collection’s luxury country house hotel on 8 September 2022. Chef Adam Smith’s menu will offer a tapestry of familiar flavours reimagined in unexpected ways, combining the classics with modern touches and layers of personal experience.
From April, Acme Fire Cult, a new live fire concept from chefs Andrew Clarke and Daniel Watkins, will open its first permanent restaurant at 40FT Brewery in Dalston.
Well we may have just got into the spring season but it's never too early to get some summer inspiration, right?
The team at Ikos Andalusia has introduced the new Ikos Golden Mile Experience, offering guests the opportunity to bike or hike, independently or with a guide, to the old town of Estepona, via a variety of scenic routes directly from the resort.
Loading Comments...
%d bloggers like this: